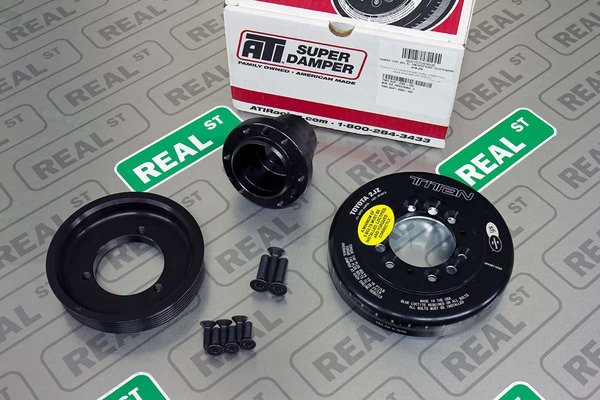 In 1998 when Titan first contacted ATI about creating a crank damper for their 2JZ, Titan never imagined the engine would be pushed to the levels seen today. Titan's race engine at the time produced power levels in line with most current mild street builds, and nearly 2 decades later Titan's race engines have tripled that number. After a long and successful run Titan went back to the drawing board with ATI to exclusively develop the updated Version 2 2JZ crank damper.

This updated version has been designed with a higher inertia rate to compensate for today’s higher-revving, more powerful 2JZs as an all-around upgrade to the current damper. This new and improved unit functions equally as well on an OEM 2JZ to replace the factory unit which are prone to coming apart. Aesthetically the damper now features a durable hard anodized black finish with laser engraved 360-degree timing marks and logos making them much easier to read. Titan also listened to our fans feedback and are happy to report this Version 2 damper has been designed to use the OEM length belt, no longer requiring a custom length belt.